Boardroom is hard to find—they don’t have a sign yet, but if you know where to go (around the back of an unassuming industrial building), you will find a door with the spray-painted stencil of a logo above it—a bear with a crown on it, to be exact.

I was greeted by Marat Mamedov, just one of the three co-owners of Boardroom Spirits. The rest of the team are Marat’s wife, Zsuzsa, his brother Vlad, and master distiller Attila Kovács. When I entered the distillery, it was dim. A single floodlight illuminated the small tasting room (the lighting hasn’t been put in yet). There’s an L-shaped walnut bar, and behind it are shelves full of Boardroom Vodka.

The tasting room isn’t a bar, though. “We’re more manufacturing focused with just a small tasting room,” says Marat. “We really wanna focus on the tour aspect of it and the education of what goes into distilling.” So rather than running a full bar, there will be tastings of Boardroom spirits along with a few signature cocktails. They also have a partnership with Drexel University and plan to hold workshops on distilling. 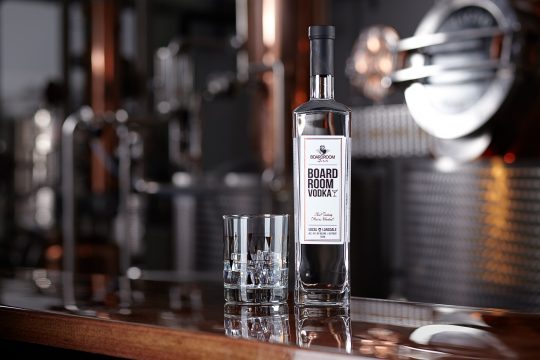 Behind the tasting room is a burnished still with a wall behind it (they want the still to stand out in the tasting room) in a big warehouse, which for now they consider to be a storage room—at least until they get everything in order. There’s a container they had filled with the mash provided by Round Guys Brewing Company, which they used to make their whiskey. Once their equipment arrives next month, they’ll be able to make their own mash and in turn, make more whiskey.

Attila Kovács, their master distiller and “mad scientist” with a PhD in Fermenting and Distillation Studies, is the man behind the spirits. He’s currently living in Budapest, but that doesn’t stop him from making Boardroom’s spirits—all he needs is his laptop. Marat says that Attila “logs into the still from his laptop, sets the recipe, and runs the distillation.” Meanwhile at the distillery, Marat checks the alcohol content and provides feedback to Attila until they create a perfect batch. Still, once Attila makes it to the states, the distilling process will be much easier for them.

Boardroom is distilling non-GMO, corn-based vodka, which they had to get right—Marat and Vlad are Armenian, so vodka plays a big role at the dinner table. “When we do our family dinners, it’s vodka and food. We toast to someone’s health, and by the end of the night you’re toasting a lamp.” To make sure the vodka was good, Marat says that they needed approval from their dad and his friends, which they got.

Besides vodka, they currently have two barrels of Round Guys-collab whiskey aging in the back (they plan to eventually have 100-120 barrels of whiskey total) that they hope will be ready by Thanksgiving. They’ve been working on a cranberry-infused vodka, which should be out in about a month or so, which will be 100% natural. Zsuzsa says “it’s one thing to put the fruit in to get the flavor, but we want to get the aromatics as well—instead of putting in artificial chemicals or flavorings, we want to do this naturally.” To the Boardroom team, the scent of a spirit is just as important (if not more important) as the taste.

More infusions (like a blueberry vodka) are showing up in the spring, and come fall, they’ll create European-style brandies, or as they call it, “fruit whiskey.” Gin and rum are somewhere down the road. “We have an idea for gin to be an experience, we’re just not doing it right away,” says Marat.

Undoubtedly the most distinct products to anticipate from Boardroom are from their “Specialty line”—spirits made from 100% beet, carrot, and celery root. Although the concept sounded strange and unappetizing to me at first, once they were explained I understood. “Not only is it going to be great for cocktails…but it’s also really targeted towards chefs because we wanna extend spirits from drinking and to see what we can do in the kitchen,” says Marat. So yeah, a bloody mary with 100% celery root vodka doesn’t sound too bad after all. These specialty spirits aren’t out just yet, but soon enough you’ll be able to try them out.

If you want to get your hands on some Boardroom Vodka, stop by their tasting room, and if you like it (you probably will), you can get a bottle right there. Once Attila comes to the states and their production picks up, they plan to work on a distribution plan.

Eventually, Boardroom will have a table for local restaurants to bring in samples of their food for customers to try—just one way to support their fellow local businesses.

Right now Boardroom is only open for tastings and sales, but I recommend staying a while to chat with the Mamedovs—they’re some of the friendliest people you’ll meet and have some fine stories to tell. And once you’re finished, they’ll probably send you off to their friends at Round Guys or Stove and Tap (when they open).